In order to commemorate Verdun, I decided to give you an overview of the 5th scenario. It is called Storm of steel and depicts a typical assault for 1916, with a (very) extensive artillery barrage. 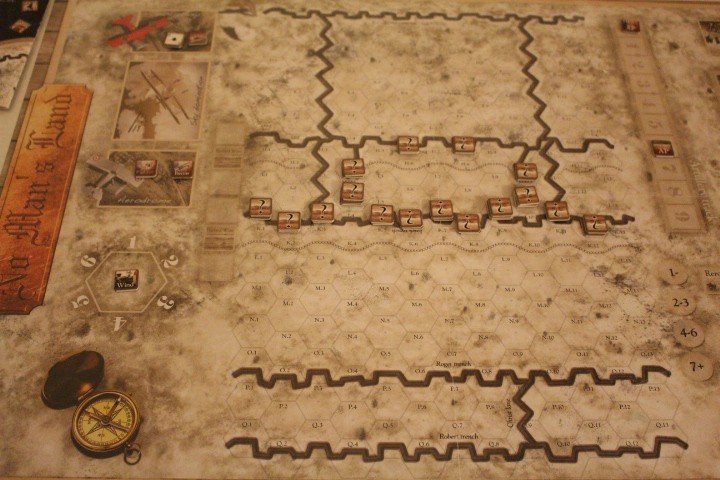 Once the defender has set his units up, the Sky Domination Phase begins ! All aircraft are committed.

The German player possesses an Ace. He attacks the French player aircraft. He rolls #1. No effect.
Then all aircraft may perform a dogfight.
German #6, French fighter: #2, French reco: #5
The German fighter is destroyed, and the French player decides to destroy his fighter too.

The French players decides to reveal the German Artillery sector (not on the picture) and the two hex with a "?" marker in the support trenchline. He thought there was a trick nearby. But he is disappointed. 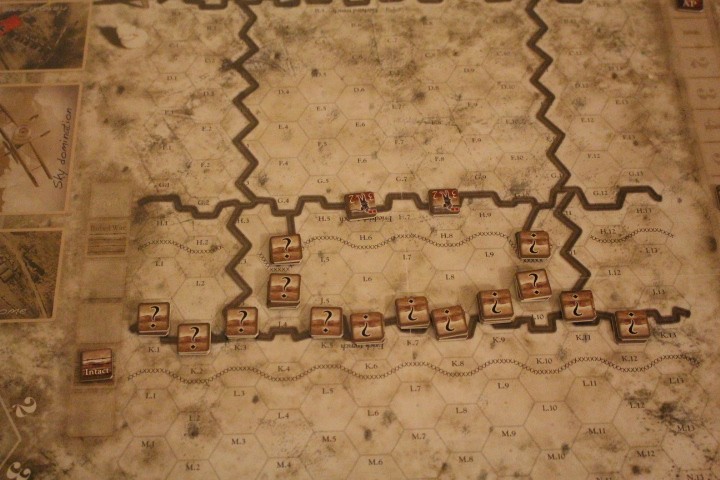 The Reconnaissance aircraft is removed from play (it is not able to perform strafing attacks).

The French player may attack two hexrows. Each will be subject to 2 bombardments. He chooses the J and K (barbed wire) hexrows.
There is no scatter for this type of barrage (Straight barrage).
As per the scenario rules, perform two independant tests for the targeted hexrow (i.e : don't use the +1 for extra Artillery point in the hex)
Each hex of the K hexrows receives 2 TEST markers (place them in the Barbed Wire hex on your left).

Preliminary barrage had some "interesting" effects, but the French player decides to pu the boot in. As per 1.5.3.3, he may perform up to 3 extra straight barrage (but he will suffer malus on the Surprise Table). He decides to perform 2 more barrages on the K hexrow. He places 2 extra TEST markers in the barbed wire box (for a total of 4) : he really wants to prevent them from stopping his troops. He also decide to perform a last artillery barrage on the J hexrow. A little gap appears (but, by experience, I know that it is far to be sufficient!)

Surprise
He rolls a #6 (+3 as per the scenario special rules +3 for the 3 extra artillery barrage) = no surprise at all. This is the other side of the coin: endless artillery barrage were supposed to destroy barbed wire and kill all enemy soldiers. But there were not so efficient than promised.

The French player set his units on the map. He decides to stack them two by two and to form two groups. He puts his mortars at the center of his system. 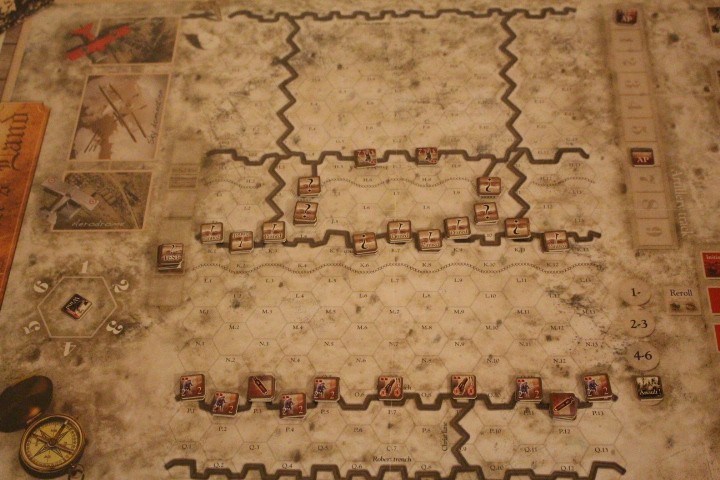 The aim of this generic scenario is to show the effects of the use of more and more shells during days and weeks.